We’ve made it to Genesis chapter 21. Aren’t you glad? The last couple of chapters in Genesis have been hard to read through. The graphic portrayals of the depravity of man can be overwhelming. Remember that Shem, Noah’s son is still alive somewhere in the Middle East. He has witnessed his descendants and those of his brothers, descend into wickedness. Like the world before the flood, evil had filled the world and, like the flood, God demonstrated that He will not tolerate sin in the heart of man forever. The destruction of Sodom would stand as a monument to the sinfulness of man and God’s perfect justice. The warning has been issued and mankind is without excuse.

We also saw the effects of sin upon a righteous man that has chosen to stray from the path. Like Christian in A Pilgrim’s Progress, Lot has often taken a path that he ought not to take. Where the right path looked hard and steep and rocky, Lot chose the wrong path because it looked smooth and easy. His choices would not only affect him but his entire family. Lot’s journey was still taking him to the Celestial City, but the path he took was a lot harder than it had to be. Those choices he made would have a sinful outcome in his life, and yet, God was always at work. God would often use the children of Lot to punish the children of Abraham. And yet, God would bring some of those children that came from that horrible sin to be in the genealogy of Jesus Christ. God’s eternal plan contained the sinful rebellious acts of man. Those acts of darkness God used to bring about the great light.

But this is a true story and not a fairy tale. Along with the happiness there comes growing jealousy and division in the family. Where there are blessings and joy from God there comes hatred and resentment from the world. And yet, through both God works his plan. God is steadfast.

As we look at the first twenty-one verses of chapter 21, we see them easily divide into two parts. One through 7 tells us of the birth of Isaac, which reminds us that God always fulfills his promises. Eight through twenty-one explains the dissension in the family which leads ultimately to a final separation and we are called to contemplate the fact that God’s loving choice separates us. 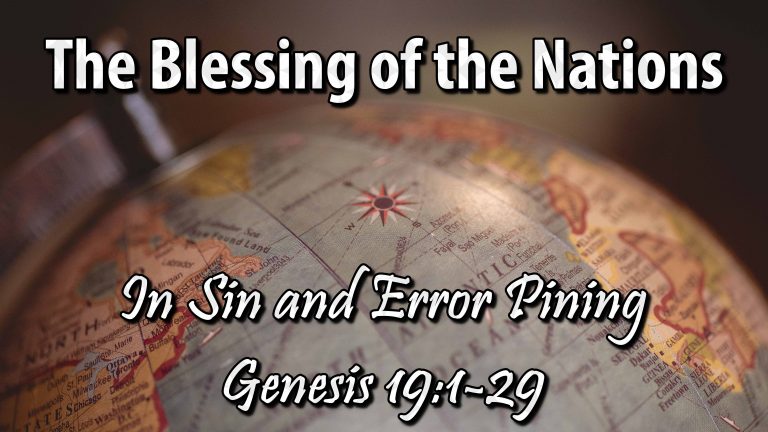 In Sin and Error Pining Over the past several weeks we’ve been looking into this appearance of the Lord to Abraham. It started with God changing Abraham’s and Sarah’s names. God gave Abraham the sign of circumcision to strengthen his faith. Then God gave Abraham the promise that in a year he would have a…

Many of the stories we read in Genesis are about the choices humans make. God providentially brings about a crossroads and those involved have to decide which way they will take. Will they follow God and goodness or will they choose their own path and evil?

As you read through chapter 17, there is one phrase that is repeated over and over by God. It is, “I will.” God says “I will” twelve times in this passage. In the paragraph we have before us we have five instances of “I will”. Along with these, “I will” statements are several “shall” statements….

This week we are going to continue looking at the story of the search for a wife for Isaac. We are in the closing years of Abraham and his death is quickly approaching. We have already seen that this final story in the life of Abraham is centered upon his son. The question that is…

Today, we finish looking at Genesis chapter 22. Remember what we looked at last time. We had the monumental event of Abraham’s life. God asked him to sacrifice his son Isaac on the altar as a burnt offering. This whole situation was not for God, as if he needs anything, but it was planned for…

Over the last couple of weeks, as we studied Genesis chapter 24, we saw a clear display of the providence of God. We also witnessed the rock-solid faith of Abraham and his servant in the providence and provision of God. God is sovereign and has a plan and so we should not be surprised when…