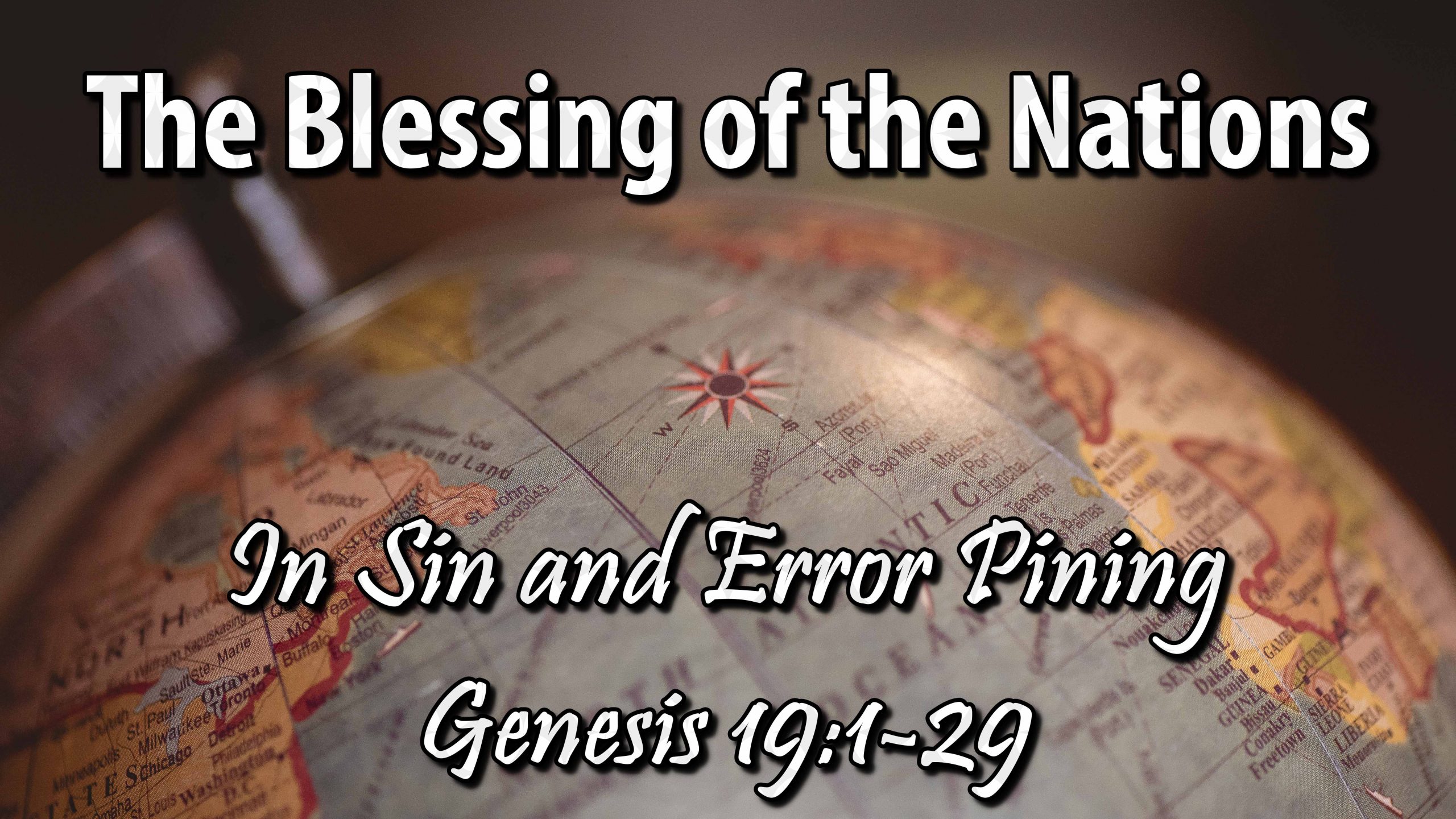 In Sin and Error Pining

Over the past several weeks we’ve been looking into this appearance of the Lord to Abraham. It started with God changing Abraham’s and Sarah’s names. God gave Abraham the sign of circumcision to strengthen his faith. Then God gave Abraham the promise that in a year he would have a child from Sarah.

In chapter 18, a little time has passed and the Lord appears to Abraham by the oaks of Mamre. The Lord repeats that in a year’s time Sarah would have a baby. By now, Abraham is believing. He is trusting in God’s promises and his plan to bring about the promise but, Sarah has an issue. She’s not quite there yet. And so God challenges her. He confronts her doubt. He instructs her.

God then turned to Abraham and tells him that he is going to let him in on his plan. God tells him he’s going to destroy the cities of Sodom and Gomorrah because their sin is so great. Abraham follows the lead, the prompting of God and intercedes for the wicked. Abraham begins to fulfill the promise that he would be the blessing to the nations. He prays according to God’s great mercy that God would spare the cities if 10 righteous persons were living there. Of course, God would spare if there were ten. The problem is, as we will see today, there weren’t 10 righteous. But Abraham was correct in his intercession.

And so that brings us to chapter 19. I hadn’t planned on preaching about Sodom and Gomorrah right before Christmas. It’s not a typical advent text. But as I began to think about it and talk with the elders, the idea began to grow on us, on me. John 1:4-5 came to mind. “In him was life, and the life was the light of men. The light shines in the darkness, and the darkness has not overcome it.” As I said last week, there is a contrast made by God here. The light of new life, the promised child of the covenant, is contrasted to the death and depravity found in the city of Man. Though the darkness is great and is widespread the light shall not be overcome.

We saw in the previous chapter that Abraham had moved his household to Gerar. Abimelech, the king of that area, took Sarah into his household because he believed that Sarah was an unmarried woman. Why did he think that? Because Abraham and Sarah used the line that they had come up with in Ur; Sarah…

Abraham is a normal man and his faith ebbs and flows depending on the situation he finds himself. His desire is to grow in the faith and to be pleasing to the Lord but he still struggles. His view of God is still too small. But here in chapter 17, and specifically the section we…

The section we have before us today describes why Abram and his family left Ur and were headed for Canaan. It was the call of God.

Why do we fear and why is it that when God speaks in the Old Testament or Jesus in the New, many times the first phrase is, “fear not,”? Let’s look at Abram here and see if we can’t find answers to those questions and maybe we’ll find a cure for our fear.

You see, people often see a stark division between the Old and New Testament. Some will suggest that there is a God of the Old and a different God in the New. They see very little continuity between the Testaments or the way that God acts. But we as Christians know that this is not…

And now we arrive again at one of those moments in Abram’s life where his feet almost slip. And why? It’s not because his enemies are gathering around him. It’s not because he is an enemy of God. It’s because of his own doing. Let’s look at what happens and as we do I want…