As I was thinking about all the things, I wondered if there was a common theme running behind them all. The Bible tells us that we know the schemes of the devil. So I wondered, what old scheme has he used to stir up all this trouble? Is there a common evil amid all these issues? Is there a language that is being used? There has been.If you look at the secular media and, unfortunately, many Christian sources as well, you will find one idea being peddled. It’s fear. Not the fear of God, not rational fear of danger but fear of man. It’s the fear of man. But you already knew that, right? Think about it for a moment and I think you’ll agree with me. What has been the underlying ideology that has driven most of the issues and evil today? The fear of man.

All the issues that have been brought to the forefront this year have all been driven by the fear of man. Intimidation is everywhere. Side with us, say that we are right, accept what we believe and doing is morally good or else! Say Black Lives Matter or we will punch you in the face. Wear a mask or we’ll yell at you and run you out of the store, or even arrest you. If you vote for this candidate you are the problem and will be dealt with. If you meet as a church then you are unloving and setting a bad example. If you don’t believe that there are 70+ genders and that a person can change from him to her to they whenever they choose regardless of their biology then you are hateful and phobic and you deserved to be silenced. We’ve all felt it this year. There is no wonder why domestic abuse and suicide numbers are up this year. Not only has the normal been changed but we are swimming in a flood of the fear of man. A culture can only go down this path for so long. Either it will implode or a different answer will have to come and replace the fear of man.

Proverbs 29:25 says, “The fear of man lays a snare, but whoever trusts in the Lord is safe.” Of course, Scripture has something to say about this. This is not new and the solution to the problem is older than the problem. On one side we have the fear of man on the other trusting in the Lord. In the Garden of Eden, Adam and Eve were to trust in the Lord. They walked with him and talked with him. There was trust. But that trust was destroyed by a lie and an act of rebellion and in its place came the fear of man and the sinful pair sewed fig leaves together to hide their nakedness from each other. The fear of man would be passed down through the ages but the cure to that disease has been passed on as well.

The Fear of God: Lesson 13
The conclusion to the series “The Fear of God” with Dan Litwiller, based on John Bunyan.
www.lvchurch.org

Christmas Eve Service
Readings based on a pamphlet by JC Ryle.

Ephesians 3:14-15 “For this reason I bow my knees before the Father, from whom every family in heaven and on earth is named.”

Let us spend some time this evening thinking about these words. They are words that ought to stir some feelings in our minds at any time and especially at Christmas. No one on earth is not a member of some “family”. The poorest as well as the richest can tell you something of “his family.”

Tonight, we will speak of family and hope that you will take notice. We do not want to take away anything from your Christmas celebrations, or even to lessen the joy of your Christmas gatherings. We only want to remind you of a better family, a heavenly one, and of the great benefits that membership in this family conveys. We want you to be a part of that family when its gathering shall come at last – a gathering without separation, or sorrow, or tears.

Good News of Great Joy
www.lvchurch.org
“And in the same region there were shepherds out in the field, keeping watch over their flock by night. And an angel of the Lord appeared to them, and the glory of the Lord shone around them, and they were filled with great fear. And the angel said to them, “Fear not, for behold, I bring you good news of great joy that will be for all the people. For unto you is born this day in the city of David a Savior, who is Christ the Lord.”
The announcement of the birth of Jesus to shepherds was an announcement of great joy. The long-awaited savior had come. This was not a day of fear. This was not a day for grieving and sadness but a day of joy. The savior had finally come.
Was there a reason for fear? We’ll the immediate circumstance of these shepherds would say yes. The shepherds were out in the fields in the darkness of night and all of a sudden, a glowing man appears. That would be enough to strike fear in the strongest of hearts. But once you realize what is standing before, your mind must begin to race. When an angel appears shining with the glory of the Lord, who knows what to expect next. Are they coming in judgment? Are you dead and they are coming to escort you to your eternal destiny? Why is this happening? They probably had the same reaction as Mary when Gabriel visited her. “She was greatly troubled at the saying and tried to discern what sort of greeting this might be.” Mary and the shepherds did not know that the fullness of time had come. She was unaware that this time was sacred to the Lord her God. It was not a time to mourn or weep or to be afraid. It was a time to celebrate. It was a time of joy. The Prince of Peace had come. The embodiment of the joy of the Lord had stepped into the world.
These ideas of joy and peace were not new concepts at the time of the birth of Christ. The Old Testament is full of calls to joy. The Psalms for instance repeatedly call for rejoicing in and unto the Lord. Joy because of what God has done was not a new announcement from the angels, but a call to rekindle the joy that should have been in the hearts of God’s people from the beginning.
One of the more memorable calls to joy in the Old Testament is found in the book of Nehemiah. I realize that Nehemiah is not a typical advent text, which is unfortunate, because there are many parallels. The joy that would enter the hearts of the shepherds on that night and the people in Nehemiah’s day, was the same joy that has entered the hearts of God’s children since he told Adam and Eve that the offspring of the woman would bruise the serpents head. Let’s read Nehemiah 8:9-10 and let us consider four questions about joy. What is joy? What about grief? What is the response of joy? How is the joy of the Lord our strength?

The Fear of God: Lesson 12 – www.lvchurch.org – In this lesson, we explore the things that can hinder the fear of God in our lives. 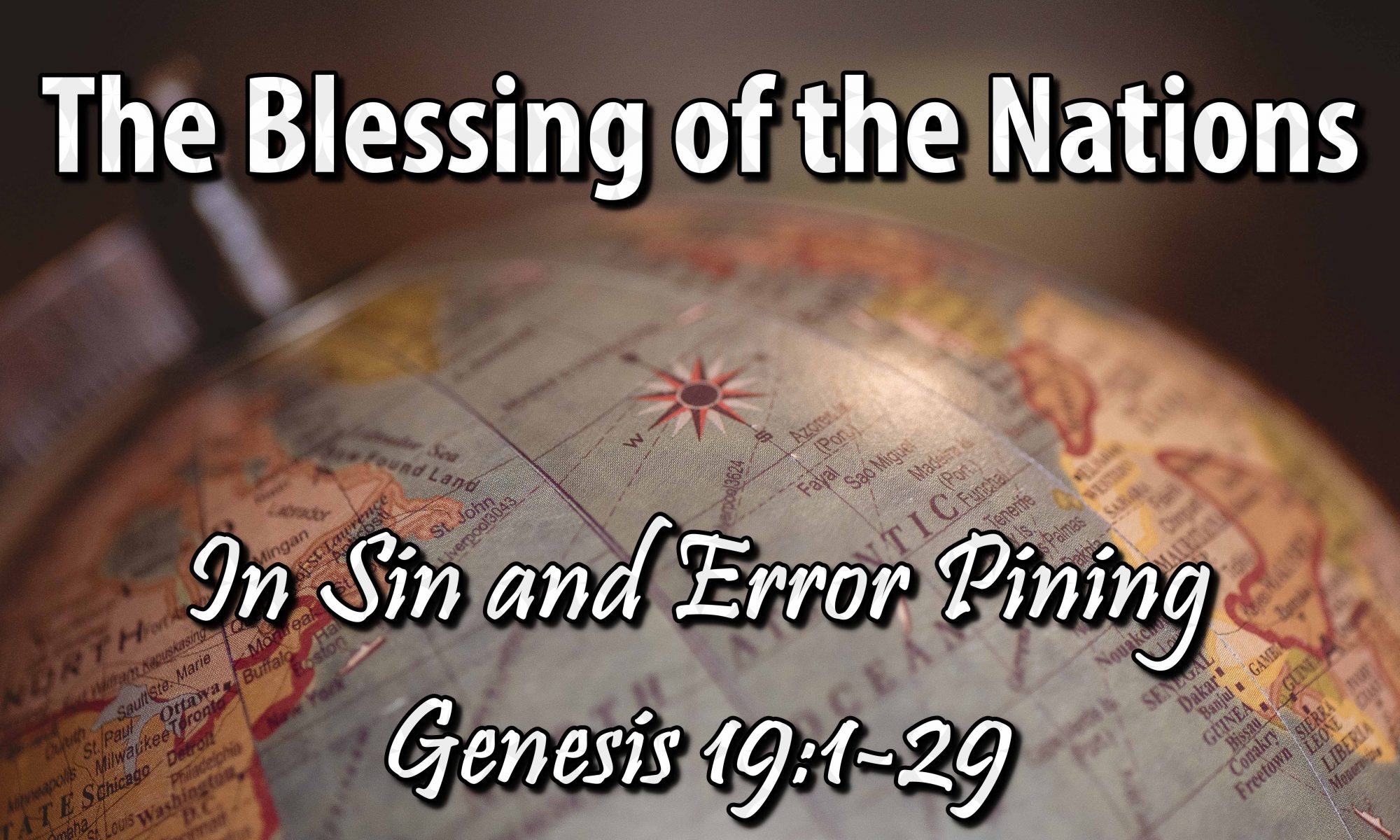 In Sin and Error Pining

Over the past several weeks we’ve been looking into this appearance of the Lord to Abraham. It started with God changing Abraham’s and Sarah’s names. God gave Abraham the sign of circumcision to strengthen his faith. Then God gave Abraham the promise that in a year he would have a child from Sarah.

In chapter 18, a little time has passed and the Lord appears to Abraham by the oaks of Mamre. The Lord repeats that in a year’s time Sarah would have a baby. By now, Abraham is believing. He is trusting in God’s promises and his plan to bring about the promise but, Sarah has an issue. She’s not quite there yet. And so God challenges her. He confronts her doubt. He instructs her.

God then turned to Abraham and tells him that he is going to let him in on his plan. God tells him he’s going to destroy the cities of Sodom and Gomorrah because their sin is so great. Abraham follows the lead, the prompting of God and intercedes for the wicked. Abraham begins to fulfill the promise that he would be the blessing to the nations. He prays according to God’s great mercy that God would spare the cities if 10 righteous persons were living there. Of course, God would spare if there were ten. The problem is, as we will see today, there weren’t 10 righteous. But Abraham was correct in his intercession.

And so that brings us to chapter 19. I hadn’t planned on preaching about Sodom and Gomorrah right before Christmas. It’s not a typical advent text. But as I began to think about it and talk with the elders, the idea began to grow on us, on me. John 1:4-5 came to mind. “In him was life, and the life was the light of men. The light shines in the darkness, and the darkness has not overcome it.” As I said last week, there is a contrast made by God here. The light of new life, the promised child of the covenant, is contrasted to the death and depravity found in the city of Man. Though the darkness is great and is widespread the light shall not be overcome.

In this study, we talk about how to grow the fear of God in our lives.
www.lvchurch.org

The chapter before us breaks down into two main scenes. In the first we find the promise and the struggle to believe in verses 1 -15. We have already seen God giving Abraham assurances of the promises and bolstering his faith and here we find God doing the same for Sarah. Then in the second scene we find the plan and the intercession. God has a plan, which included Abraham and his prayers for the lost.

We started talking about what kind of person does not fear God. A person who is arrogant, greedy, and gluttonous. Today we are going to talk about a few more topics. Liars do not fear God. This sin of lying prevents us from fearing God.